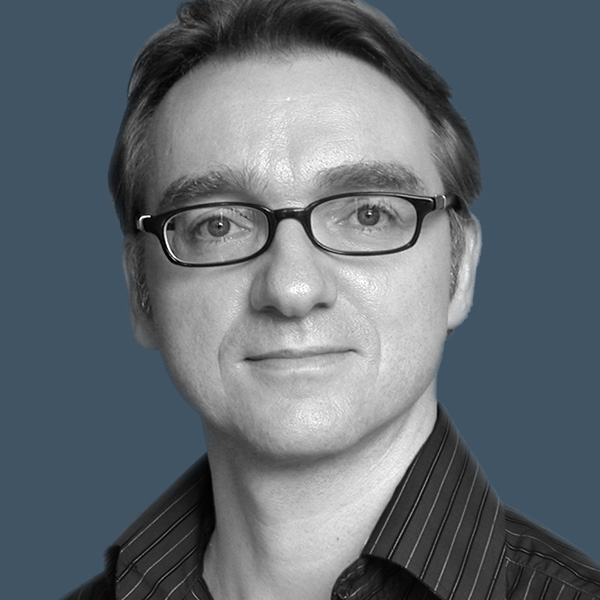 Wolfgang Schwarz is co-founder and partner at symbologie., as well as, founding partner and strategy director at Bigbang — one of the firms in the symbologie. design consortium. He manages business operations and directs project strategy. He also guides the ever changing technology aspects of our creative business. In addition to his technical prowess, Wolfgang is valued for his ability to see the big picture and build consensus toward successful solutions. For more than 20 years, Wolfgang has directed and ensured the success of a wide variety of projects for clients such as Procter & Gamble, DC Comics, Disney, Gillette, General Mills, and many others. His vision and ingenuity keep his team and their clients on a forward trajectory.

In the mid 1990’s Wolfgang joined Berté Design Studio. He quickly transformed the studio’s technical capabilities, expanding the traditional design studio fully into the digital realm. By the late 1990’s the studio had evolved to become a full service creative consultancy, and together Wolfgang and Maryann Berte launched a re-brand as Bigbang.

Prior to that, Wolfgang had combined his mathematical expertise with an entrepreneurial spirit to write and develop original software programs for complex Wall Street investment products.

As a physicist, he conducted fundamental research into new methods for etching faster, more powerful computer chips. His project earned both federal and private sector funding from DARPA and IBM. He designed and developed original hardware and software used to conduct the ultra-high vacuum laser experiments and analyze collected data.

Born and raised in Germany, Wolfgang first saw the US when he took a year off after high school to travel the country. He made his way through 30 of the 50 states on foot, by bus, motorcycle and car. Eager to experience the country’s diverse natural beauty and its people, he chose to stay with families he met along the way. His interest in cultural exchange, and his creative and intellectual curiosity are a valued influence on our work and success at Bigbang and symbologie..