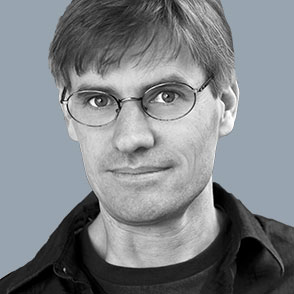 Rick Minnich is an American independent filmmaker based in Berlin, Germany.  From his early short films about the sweeping changes in Berlin and Eastern Europe after the fall of the Berlin Wall to his ironic and compelling feature-length documentaries about his former homeland, Rick has steadily produced an oeuvre of films which merges the best of the European auteur tradition with the rhythms and quirkiness of American independent filmmaking.  Now he’s also bringing his award winning film expertise to symbologie. to help our clients bring their stories to life.

“In an age of overabundant media distractions, there’s one thing that can make us pause and take notice — a story well told,” says Rick.  “It touches our hearts and sparks our imagination.  This is what I do — with a passion.”

Born and raised in the great American West, Rick studied film at California Institute of the Arts (CalArts) and English literature at Columbia University before relocating to Berlin.  As a graduate fellow of the German Academic Exchange Service (DAAD), he completed his studies in directing at the University for Film & Television “Konrad Wolf” in 2001.

Minnich’s graduation film HEAVEN ON EARTH (2001) screened at the prestigious International Documentary Film Festival Amsterdam IDFA and won the Babelsberg Media Prize for the best graduation film (documentary) in Germany. His debut film HOMEMADE HILLBILLY JAM (2005) had its world premiere at North America’s leading documentary film festival HotDocs in Toronto in 2005, and is distributed in the US by First Run Features. Minnichʼs latest film FORGETTING DAD won the Special Jury Award at IDFA in 2008, the Grand Jury Prize at GZDOC in Guangzhou, China in 2009 and was shortlisted for the ‘Lola’ — the German Oscar — among other honors.

Rick Minnich’s films have screened at the Museum of Modern Art, Lincoln Center, Anthology Film Archives, the National Film Theatre, and at film festivals around the world, and have been broadcast on television stations throughout Europe, North America, Asia and Africa, including ARTE, ZDF, 3Sat, ORF, WDR, YLE, IKON-TV, SVT, Knowledge Network, etc.