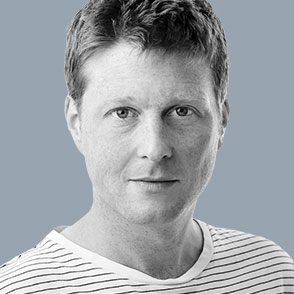 Mark Garner is a photographer specializing in dynamic portraits. His approach takes inspiration from Philippe Halsman Jumpology series and the energy of Lois Greenfields imagery. “There needs to be energy within the session in order to achieve natural results which express a sense of fun that was present”. Working both in and out of his Berlin studio, he creates images with striking visual appeal and powerful story telling.

His interest in photography started early with a fascination for film, yet his interests and talents led him on anything but a straight path to becoming a professional photographer. Initially, Mark studied Building Surveying in Newcastle, England. After receiving his degree, he worked on a variety of high prestige restoration projects in London.

During a sabbatical year from surveying, Mark traveled to the United States. His “year off” didn’t last long as he became intrigued with the expanding internet market. He began working for internet startup “SmartFood” in Cambridge MA, the first on-line supermarket. His internet (ad)venture led him on to Hong Kong rather than back to surveying. There he worked both in the internet industry and for the film company Shaw Brothers.

After working and traveling extensively around South East Asia and Australia, always with a camera at his side, Mark returned to London to study 3D animation at St. Martin Art College. He then worked at Ridley Scott’s post production house, “The Mill”, on such films as Cats and Dogs, Harry Potter, and Tomb Raider. During this period, he also worked as a freelance graphic designer for investment firms. Eventually he took a full time position in design for Deutsche Bank, where he was employed in their London, Paris and Frankfurt offices.

A sunny weekend in Berlin had left Mark fascinated with the city. So after 4 years with Deutsche Bank, Mark decided to move to Berlin and set up his photo studio. 8 years and 3 kids laters, Berlin is home and photography is his passion as well as profession.