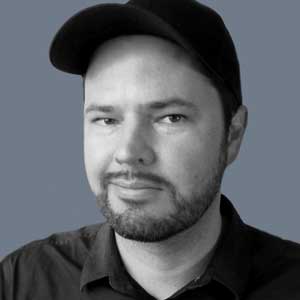 Carl Albrecht is a highly skilled motion designer and 3D visualization specialist with more than a decade of experience in the media design, visual effects and broadcasting industries. He has worked at a wide range of award winning companies for clients such as MTV, Bombardier, Volkswagen, Deutsche Welle and others. We are thrilled to have Carl join our network and bring his powerful and elegant visual work to symbologie. clients.

Specializing in animation with Autodesk Maya and Motionbuilder, his 3D work ranges from character animation to dynamic product simulations, and television ad spots to visual effects installations. His design background enables him to be involved in all aspects of production from conceptualizing and development of the look, to compositing and editing.

He has also worked on large scale media installations such as the “Magic Box”, a 16 x 16 meter cube, which was the center piece of the State Grid Pavillion at Expo 2010 Shanghai.  At M-box studio, Carl was responsible for creating the “Magic Box” intro and extro LED animations for this Red Dot Design Award winning installation.

Born in Cape Town, South Africa, Carl graduated with honors from the Tygerberg School of Graphic Art in 1995.  He then studied at the newly founded School of Media and Creative Arts in Cape Town, where he was awarded for his traditional cell animation work.

Carl first traveled to Europe at the age of 19.  Already an enthusiastic painter and award winning portrait artist, he went to gain knowledge and inspiration from art museums and exhibitions in London, France, Germany and Holland.  Inspired by his travels, Carl decided to focus his studies on motion design upon returning to Cape Town.  In 2000 Carl accepted a job in 3D animation with Living Screen by ID Media in Stuttgart and moved to Europe.

“Universal”, a vector based animation piece Carl created, was featured in 2001 at film festivals in Berlin, Leipzig, Hamburg, and at the 12th Stockholm International Filmfestival.  His travels to Berlin that year drew him to the dynamic city he has called his home since 2002.

Carl is fluent in English and German.  His hobbies include music production, fine arts and once in a blue moon trying to conjure up his skateboarding skills.