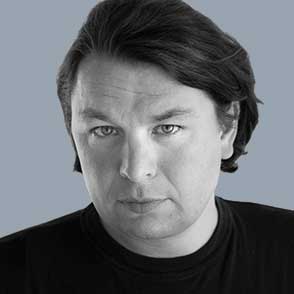 Axel Schneppat is an award winning cinematographer. His work encompasses cinema, television and image campaigns with a focus on documentary film. With more than 35 titles to his name and over 15 years of international experience in the industry, he brings the highest degree of expertise and professionalism to every project.

Axel is not only a skilled cameraman, capturing beautiful and powerful imagery, but has a unique talent for connecting with the people he films, making even non-actors comfortable and relaxed in front of the camera. This is an especially valued asset for symbologie. clients who want to present their business, institution or initiative in the most authentic and compelling way.

His first feature length documentary film, “Havanna mi Amor” (Director, Uli Gaulke), was honored with Gold at the German Film Academy Awards in 2000. In the same year Axel was awarded the German Kamerapreis for best cinematographer for this film, and another of his projects, “Leben 1, 2, 3” (Director Michael Schorr) — a live action short film, was featured at the Cannes Film Festival.

His first feature length film drama, “Schultze Gets the Blues”, was awarded the Directors Prize at the Venice International Film Festival in 2003, and was released by Paramount Pictures in theaters around the world.

Axel Schneppat continues to produce documentaries and dramatic films which are regularly screened at all the major international film festivals and receive numerous honors and awards.

Axel studied cinematography at the University of Film and Television “Konrad Wolf” Potsdam-Babelsberg. Axel works on film projects around the world and maintains his studio in Potsdam, where he lives with his wife and three children. He speaks German, English and Russian.